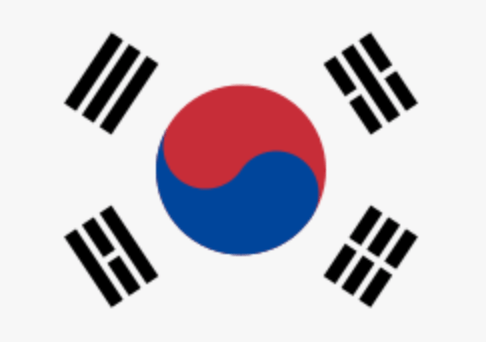 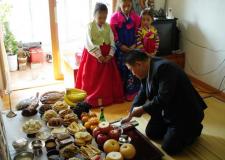 Chuseok is a time when Koreans connect with their roots. Traditionally a celebration of the harvest, it is surrounded by the autumn color of late September or early October. Across Korea, trains are packed and traffic is jammed as people journey to their hometowns.

In their homes, families gather around the table, which is covered with meats, fish, vegetables, sweet rice, dumplings, and fruit. The most unusual Chuseok dish is songpyeon. It is made from rice powder dough surrounding a sweet paste filling made of sesame, beans, or chestnuts. These are steamed with pine needles, infusing the house with their fragrance.

Food is also carefully and beautifully arranged on the family shrine so that the ancestors’ spirits can also enjoy the feast. Afterwards, families climb to the hillside graves and pay respects to their ancestors at their grave sites. They pull weeds, sweep the graves, and make offerings of food and drink. They end by bowing in thanks.

While it is a time of thanks, Chuseok is also a time of bounty and happiness. Children dress in hanbok, traditional silk clothes. People celebrate with lion dances and tug-of-war contests. Live Nong-ak folk music performances combine drumming, dancing, and singing.

Groups of women join hands in a circle to perform the gangangsulae. They are recreating the story of Korean women who dressed as warriors and danced around the mountains in 1592. The dancers tricked the Japanese invaders into thinking that Korean army was bigger than it actually was.

Just as strong roots will bring a plentiful harvest, Koreans find that connecting with the past brings rewards in the present.